Dolce & Gabbana NFT drop fetches over $6 million. Is it a testament to NFTs’ bright future or just an ephemeral phase in fashion that will die down?

Could you have ever imagined that someone would spend hundreds if not thousands of dollars on a dress that doesn’t physically exist? Dolce & Gabbana’s recent NFT drop proved that fashion aficionados would spend that money on digital couture.

If you have heard the term NFT (which we are sure you may have) but don’t quite know what it is, then it’s time you get acquainted with it. There’s a huge frenzy around NFTs in fashion. And when we say huge, we mean digital assets that are worth millions of dollars.

The Creative Process Behind the Collection

The nine-piece collection was unveiled at the D&G Alta Moda Show in Venice, Italy in partnership with UNXD, a marketplace designed for digital luxury.The collection included five pieces (two crowns, two women’s dresses and a men’s suit) went through a physical design process by the two designers. The digital version of these pieces were made available  for use in the metaverse.

The other four items in the collection were completely digital, also for the metaverse. The collection was unveiled before 430 guests of the three-day event after which it was uploaded on the UNXD’s website for sale. According to Shashi Menon, founder and chief executive of UNXD, the showcase intends to draw the crypto community that is known to spend heavily on NFTs.

The designers told Vogue in email: “Fashion has always been a blend of different worlds, ever far apart from each other, and new technologies have fascinated us since our early beginnings. We thought of it (this challenge to create the NFT collection) as an innovative way to do what we love.”

The collection takes its inspiration from Venice’s artisan heritage (Murano glass). The inspiration lead to the ‘dress from a dream’ that encompasses two dresses (gold and silver), layered with opulent goblets, giving the dress a movie-costume-like feel. For the men’s collection, Alta Sartoria, the designers chose an emerald-green color for the double-breasted suit encrusted with artisan-inspired glassware.

The other four digital items from the collection include the Impossible Tiara, which features two large and 60 small emeralds with 713 tourmalines (in Paraiba neon turquoise); and three impossible jackets. 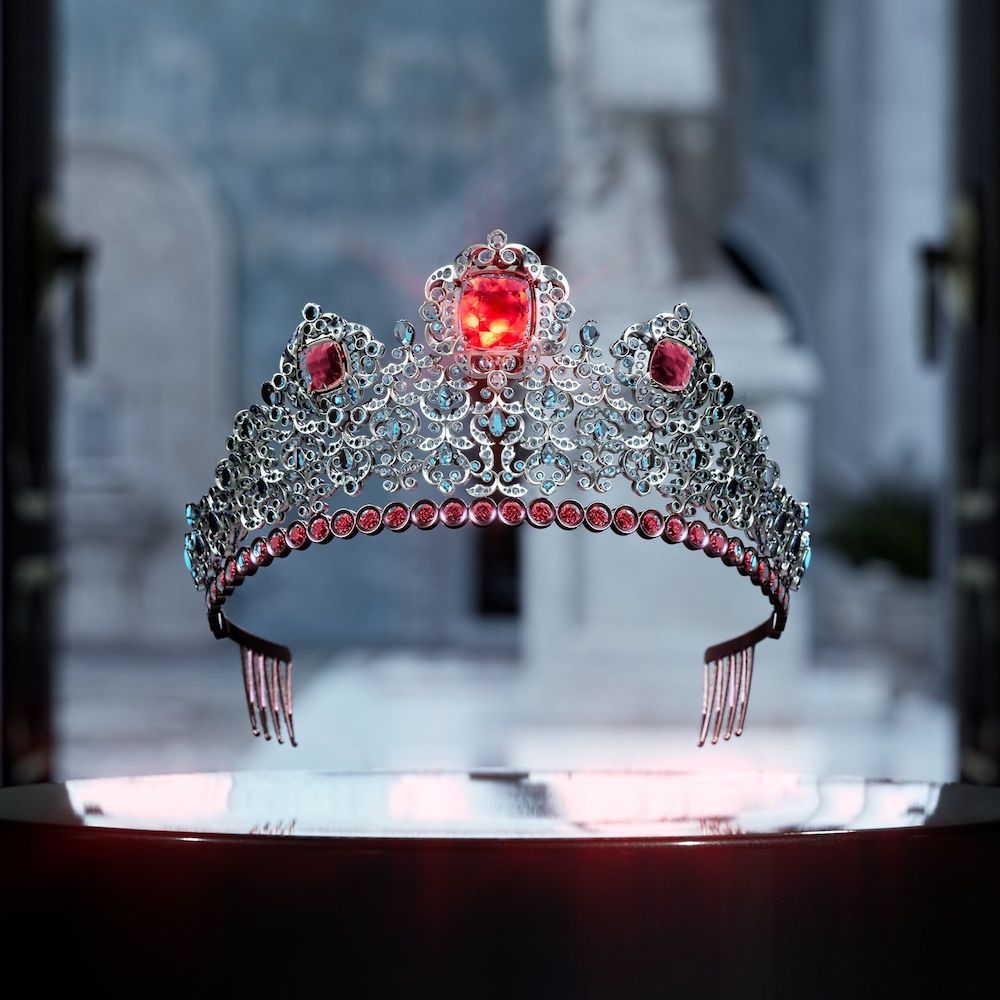 For those of you who worry about NFTs and their link to climate change, UNXD took your concerns into account by building a platform that uses Polygon, which is 99 percent energy-efficient than conventional blockchains like Ethereum, a common cryptocurrency used to buy NFTs.

The auction started on September 9 at 9 am CET and had thousands of participants ready for the auction within days. The collection was sold as a package containing both physical and digital versions of the items.

Dolce & Gabbana’s NFT drop is historic, but it’s not the first to make headlines in fashion. Kate Moss partnered with MITFNT (an anonymous collective according to Vogue) for a digital artwork that captured stills of the model behind her car’s wheel, in her bed, and in the woods. Similarly, brands like Gucci, Louis Vuitton and Burberry launched their own collections to celebrate the beginning of fashion NFTs and to become a recognizable brand for Gen Z.

Since the auction, there has been a surge in cryptocurrency’s value (10% as of this Friday), which makes the collection now worth $6.1 million. The designers will be paid according to the market”s current rate rather than the auction’s closing values.

While Dolce & Gabbana’s NFT drop did not amassed anything near Beeple’s “Everydays: The First 5,000 days” artwork which sold for a jaw-dropping $69 million, it still made enough to ignite the fashion’s next most-followed trend.

If you missed this drop, look out for more because these digital offerings are not meant to be one-offs.